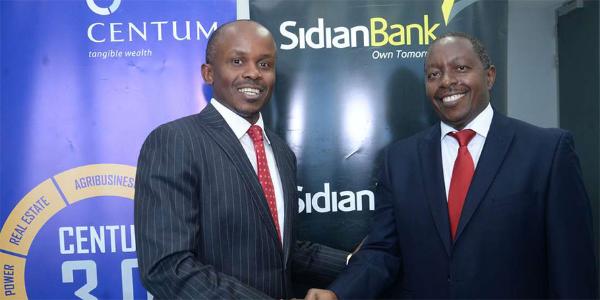 Sidian Bank’s Board of Directors is pleased to announce the appointment of Mr. Chege Thumbi who will join the bank from August 1, 2017, as the Chief Executive Officer. He takes over from Mr. Titus Karanja who has resigned from the role effective July 31, 2017 to pursue other interests.
In the two years that Mr. Karanja has led the bank, he has played a critical role in its transition following the acquisition of majority shareholding by Centum Investment Company. He has been instrumental in several significant accomplishments including the successful rebranding, positioning the institution as a bank by entrepreneurs for entrepreneurs and the establishment of a partnership with Uber that resulted in the creation of 132 new entrepreneurs, amongst others.
Mr. Thumbi is the outgoing Chief Executive Officer of Credit Bank, an organization that he has steered to success despite a very challenging operating environment. He is an electrical engineer by profession having graduated from the University of Nairobi in 1989. He started his banking career in Barclays Bank in 1990 as a graduate trainee, teller / customer service in Westlands branch. After training invarious areas of the bank, he opted to focus on ICT & Operations within the bank and was involved in early computerization of Barclays up to the year 1994.
He subsequently worked in ABN AMRO and rose to Head the IT & MIS function in the Bank. In 2001, he joined Citibank as Senior Manager, Operations & Technology within the Kenyan business operations of Citigroup. In 2005, he was recruited by Commercial Bank of Africa as General Manager, Service Delivery, Technology & Operations and was instrumental in Bank transformation and implementation of T24 core banking system. In 2008, he rejoined Barclays Bank as
Director, Service delivery, Change and Technology until 2010 when he Joined NIC in the same capacity.
While at NIC Bank, he was instrumental in driving change and implementation of T24 and other technology systems within the group and transformed the bank to a digital bank and doubled the branch network. He joined Credit Bank in May 2015 as CEO and has been instrumental in total transformation ofthe bank which was ranked the best bank in trade finance by Think Business in 2016 Banking Awards.
Mr. Chege Thumbi will take over the reins and steer the bank to achieve its five year strategic goals and vision of being a tier II bank. The Board wishes Mr. Thumbi all the best in his new role and is grateful to Mr. Karanja for his immense contribution in the period he has led Sidian Bank.
Abigael Opondo2022-04-14T10:22:03+03:00